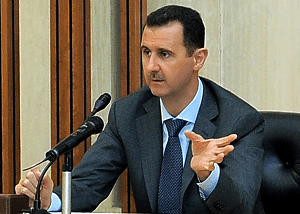 President Assad of Syria says images of entire towns reduced to rubble, thousands of murdered civilians and over a million refugees fleeing the country show “a playful tiff”.

“The pictures certainly look horrific but they give a far more drastic and violent impression of what took place than is really true.” claimed Mr Assad, “A couple of years ago I started to have an intense debate with sections of the Syrian population about the way that I was running the country.”

“What the pictures show is not my forces murdering defenceless civilians, but merely me attempting to emphasise my point that I’m doing a great job thank you very much.”

The Syrian President also claims that the images do not accurately convey the context in which they were taken, and people are not laying dead in the rubble of their own homes because they have been murdered with chemical weapons and bombarded by heavy artillery, but simply because they hate arguing.

“Yes it’s true that around one and a half million refugees have left the country. Not long after we started to have our debate the world’s press arrived in our country, so I told them to leave until the dust settles a bit and this all blows over. They don’t need the hassle of press intrusion so they have all gone to stay with an aunt somewhere.”

Mr Assad has warned that photographs can be very misleading, and before people jump to conclusions they need to understand more of the circumstances in which the pictures were taken.

“I know that an image of a child in tears, standing alone in a cloud of smoke can look upsetting, but the tears are simply because they don’t want their mummy and daddy to fight with their dear uncle Bashar anymore. And many of them won’t, ever again.”

Comments Off on Assad dismisses Syria conflict as ‘playful tiff’