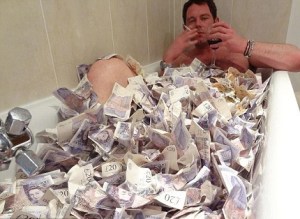 Got me a golden duck!

Cricket’s showpiece Match Fixing event is underway in England with early results going by the lack-of-formbook. An understrength West Indian team playing on an unsuitable pitch was expected to be no match for the powerful Pakistani line-up and duly went on to win by two wickets in a close match.

“It was a disappointing result” said West Indian captain Dwayne Bravo. “We were chasing a low total and suddenly favoured to win. The boys just lost concentration and hit the winning runs when they had a golden opportunity to collapse and make us a bomb.”

For his part, Pakistani captain Misbah-ul-Haq was pleased with the regulation surprise loss. “It is always good when you work on a game plan and it comes together. The West Indies are tough opponents who are well capable of matching the big boys with a surprise loss. And the spot fixing was an added bonus – you wouldn’t believe the money we made on nine of our batsmen getting less than 18 runs between them.”

Australia will also be pleased with their start after being comprehensively demolished by England. “We had been good in the warm-up matches with an unlucky win against the West Indians and a really dominant loss to the Indians where we lost by 243 runs after at one stage having them 5-55” said Australian captain Michael Clarke. “But we never underestimated England, especially after their excellent series loss against New Zealand who are extremely hard to lose to being both naively honest and bad.”

England refused to make excuses for their winning performance, merely noting that they had made a bit of pocket money with wicket keeper Jos Buttler’s first ball duck. Management did promise that the team would be miss-firing on all cylinders before the next match against Sri Lanka.

Indian bookmakers have reacted to the early results by installing Bangladesh, who are not playing in the event, as hot favourites to lift the trophy come 23 June.