Folk scene hails Seth Barley, and instrument made from own lung 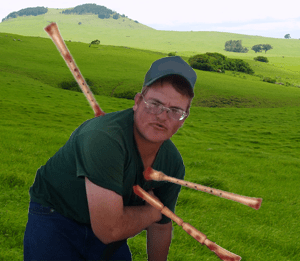 England’s blossoming folk scene is hailing a new hero, who has revolutionised traditional music by making an instrument from his own vital organs.

‘Seth Barley And His Musical Lung’ is selling out cow sheds across the country, and causing a headache for paramedics without satnav.

“I wanted to sing from the heart”, explained Seth, “but the risk of infection ruled that out.” Happily, after drilling three hand-turned wooden valves into his left lung during a dry-stone walling accident, Seth discovered that he had a new way of getting things off his chest.

Seth’s music isn’t to everyone’s taste, but few could fail to be impressed with the sheer volume of phlegm he can project. “I breathe in, stick one leg on a bucket, and make wheezy music as I thrash back and forth”, said Seth. “It’s maddeningly painful, but you have to suffer for your art.” Thankfully, Seth isn’t alone in his suffering, with many of his audience experiencing permanent psychological damage.

With the odd black-out, primal scream and frequent loss of bowel control, Seth isn’t appreciated quite so highly by the staff of St John’s Ambulance. “Normally we just have to treat a wasp sting or untangle a minor from a hurdy gurdy”, complained volunteer nurse Janet Hooper. “I don’t think I’m really cut out for containing the effects of mass hysteria.”

Seth has faith in their skills, but insists any attempts to revive him are traditional, using heart massage, leeches or powerful smelling salts. “My audience know that I insist on being saved in time with the music, and that’s just not possible with a defibrillator”, he explained.

“The fans would never tolerate me ‘going electric’.”

Comments Off on Folk scene hails Seth Barley, and instrument made from own lung

Filed under Around Harold, News, Showbusiness