Food and Drink with Miles Anour 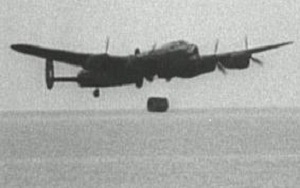 There’s a lot being written about the 70th anniversary of the Dambusters wartime air raid. There is no doubting that the men who carried out this mission were heroically brave, but the prospect of near certain death was compensated for a little by the high standard of in-flight catering in those days. I mean, compared to EasyJet or similar frightful flight providers.

For a start, refreshments and meals would have been included. I’ll bet the crew didn’t have to pay their in-flight butler extra for a measly coffee, peanuts or a Mars bar. And I know for a fact that they started stuffing their faces from the moment the pilot called out ‘chocs away’. I’ve seen the old films.

And the wine provided would have been far better quality; I mean, how much would a vintage 1943 Côtes du Rhône cost today? War or no war, there was a lot more of that sloshing around in those days.

Of course surviving the mission was a lottery, a feature which still exists today with Ryan Air.  But in 1943 when they said you’d ‘bought one’, they weren’t referring to one of the lottery tickets that they flog incessantly up and down the plane.

[Editor’s Note: We’re pleased to announce that Miles Anour will be writing a little about food and a lot about drink as often as his research problem will allow.]