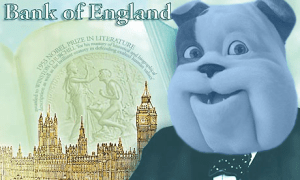 The Bank of England has said it ‘regrets’ the decision to outsource the printing of the new £5 note to a printer in China. The note that was hailed as the one to feature the image of Churchill on the back has inadvertently become an advertisement for car insurance.

The new governor of the bank, Paul Tucker, has apologised for the error and has admitted that in hindsight allowing the Chinese printers to ‘Google’ Churchill and then use the first image the search threw up was not the best idea.

“We made the presumption they’d know who our war-time hero was” the red-faced governor told us. “We had forgotten that history in China has more holes than a colander”.

“We wanted to honour Churchill for ensuring this country’s freedom didn’t die, instead we find ourselves praising the nodding dog that has kept Dawn French’s career alive.”

The mistake has been a costly one and to rectify it would wipe out the 0.3% growth seen in the economy in the last quarter. This has led to other companies offering to buy the newly created advertising space on the back of future notes.

“We have been approached by Meerkats, opera singers and the Pound Shop who wish to use the £10 note as a gift voucher for any 10 items” Mr Tucker continued, “but the company offering the most amount of money is Tesco. They see having their names on the notes the same as putting a child’s name on the back of their coat, it would be there so everyone knows who it will ultimately belong to.”

Despite the embarrassment of having a toy dog on the back of note, an insider at the bank has said it is a lot worse than first meets the eye.

When we asked why we weren’t allow to see the front of the note they told us “they also used Google to get an image for the Queen, and now you get a picture of Freddie Mercury in your pocket”