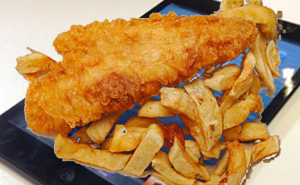 A contract to archive Britain’s Most Online Regional Newspaper has been won by local chip shop owner Stephen Trawlerman.

Back-up versions of the Evening Harold will be kept safe for future generations, in a specially labelled ‘electric area’ at the back of ‘The Stephen Fryer’.

Cllr Ron Ronsson welcomed Harold’s niche on the world wide internet, claiming it would be ‘immensly good’ for local tourism. “With his easy talk of clouds, terry gigaflops and 40 pence for a tray of scraps, there’s no doubt in my mind that I’d like a saveloy with that”, claimed Ronsson.

As of today, Haroldites of the future will be able to read about yesterday, and phone up to buy things from the small ads that were sold months ago.

“Finding out what we thought about a cake sale decades after it finished will be a fascinating glimpse into what it was like next Tuesday in the town hall”, Ronsson said.

“And who knows what someone will think in just a few months from now, when they read that Mayor Rufus D Jackson will be dobbed in anonymously for fiddling his expenses?”

Stephen Trawlerman plans to print out his archive of yesterday’s papers, so that they can serve as a back-up to his polystyrene trays.

But Stefan Rikkor of the National Archive Centre isn’t sure Trawlerman is the man for the job.

“It’s hard to read anything he’s printed out so far, because he gives it away randomly to his long queue of customers”, complained Rikkor.

“And it’s completely unacceptable to only preserve 85% of publications, just because chip shops don’t open on Monday.”