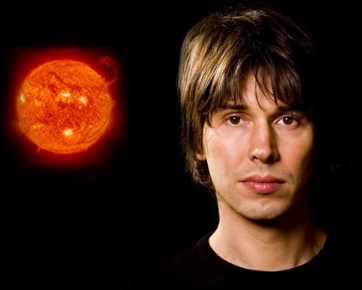 No smiles from Brian after he learns of his temporary eclipse

Keen skywatchers and other lonely men have been warned not to watch tomorrow’s total eclipse with the naked eye.

The largest glowing orb in the firmament will be temporarily out of sight, as Dara O’Briain passes briefly in front of the cameras focused on Professor Cox’s shiny visage.

John Harris, producer of BBC’s Stargazing explained the moon-faced comic’s relationship with Britain’s smiley-est man “Dara’s been running around Brian since our first series. Having only a scraped ‘pass’ in theoretical physics, he is held in orbit by the gravitational pull of Cox’s many doctorates.”

With a finite amount of cameras, it’s almost inevitable that O’Briain’s studio directions will occasionally take him in front of the pre-eminent star in the galaxy. This will happen again tomorrow but there are dangers for the unwary says Harris.

“Anyone tempted to stare directly at Professor Cox, even in eclipse, must only do so through something really opaque. Super-strong sunglasses, welding goggles or Ed Ball’s plans for the economy.”