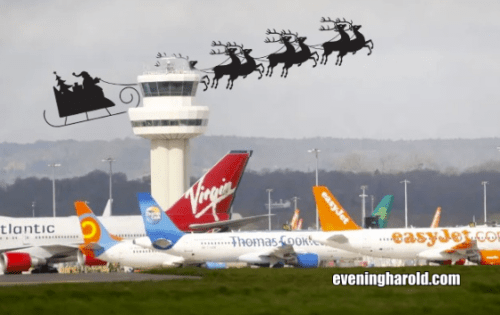 Police have dramatically called off all search operations in the Gatwick area after the first confirmed photograph emerged of the mystery “drone” which has brought chaos to the airport.

After days of unconfirmed sightings, officials were beginning to question whether the mystery flying object actually existed. This changed on Christmas Eve, when a passenger booked on flight HAR666 for Dunstable came forward with a clear photograph of a bearded object being propelled through the Gatwick sky by what appeared to be a team of reindeer.

“I saw it clear as day,” explained Brian Renfrew from the village of Harold. “Obviously some clever mechanical flying device done up to take the shape of a large merry gentleman with a large sack on what I can only describe as a sleigh.”

“I could even hear the motor whirring from where I was sitting on the airport observation deck. You couldn’t miss it, a kind of loud HOOOOOOOOOOing noise. Followed by a couple more.”

Authorities have insisted that the new photographic evidence does not indicate a threat, and that they have actually decided to cancel all search operations.

“My men and I are professionals,” insisted Detective Inspector Partridge of Gatwick Airport police. “We’re as keen as anyone to bring this mystery flyer to justice, but we have to consider the painstaking months we’ve all spent compiling our Christmas present list, and quite frankly none of us are prepared to put that in jeopardy.”

“Personally, I asked him for a ride-on mower, and I’m buggered if I’m getting on the naughty list for the sake of a few disgruntled holidaymakers.”