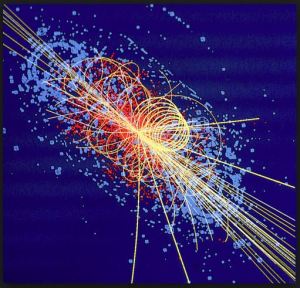 The long-awaited sequel to The Laws of Physics may be just around the corner – or, more accurately, the bend – say excited scientists at the Large Hadron Collider.

Following a massive upgrade of the CERN facility in 2015, Prof. Brian Cox has been speaking to Harold sustainable energy enthusiast Dr John Goody about the next generation of physics and the role of minuscule particles.

“There was a time when the Higgs was the smallest thing imaginable,” Prof. Cox told him, “but after a few more collisions, it turns out to be a relative galaxy compared with the teeny-weeny fragments we’ve now smashed it into. You know, some of these particles are almost as small as the level of funding British scientists get from the government.”

“The thing with these bits is that they’re so very tiny, they slip through the enforcement net of Standard Model Laws. But fortunately they are not the anarchists we originally thought but operate instead according to their own set of rather bizarre rules.”

Once classified as Mischievous Little Rogue Particles with a Rebellious Nature, it is now thought that they operate according to the Law of Utter Unpredictability, the so-called ‘British Weather Law’.

There is however a ‘dark’ side to the new physics.

“Some of these particles are pretty fundamental,” said Cox, “and we all know that any sort of fundamentalism can be a dangerous thing. Only last week we caught a bunch of naughty little quarks trying to set up an Independent State inside the vacuum left by a retreating photon. The more hawkish scientists were all for blasting them to smithereens, until someone pointed out that that was how they were created. In the end, we found that if we looked the other way and thought out about daisies and kittens, they simply ceased to exist.”

Dr Goody asked Prof. Cox whether electric cars will ever get off the ground.

“No,” said Cox, “but we can expect to see innovative products which will help us in our everyday lives, like this new kettle, for instance, which boils as soon as you start watching it. Ah, tea?”