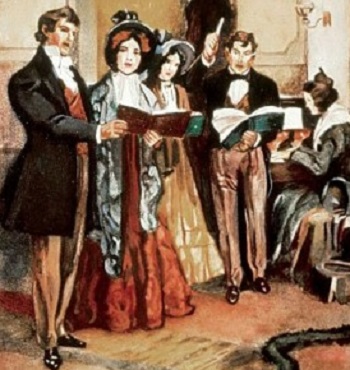 After me, everyone! ‘We’re all going on a Summer holiday…’

Just in time for tonight’s celebrations, an amateur DJ from the village of Harold has unveiled what people are already calling the ‘perfect New Year’s Eve song’, by mixing up the melody from Cliff Richard’s popular classic The Millennium Prayer with the words from obscure  poem Auld Lang Syne by little-known Scottish poet Robert Burns.

‘It was one of those things that just click,’ explained 46-year-old R. M. Renfield. ‘I was listening to the Cliff song – what a classic – and I just thought, great though these lyrics are, let’s think the unthinkable and see what it sounds like without them. Now, this is going to sound hard to believe, but I had a recording of someone reciting this old Scottish poem, Auld Lang Syne, it’s called, I think that’s Gaelic, and I had this sudden inspiration – why not mix them up? And my God, it sounded good, they could have been made for each other!’ END_OF_DOCUMENT_TOKEN_TO_BE_REPLACED