Daily Mail on Mo Farah: yeah, but he didn’t sing the National Anthem 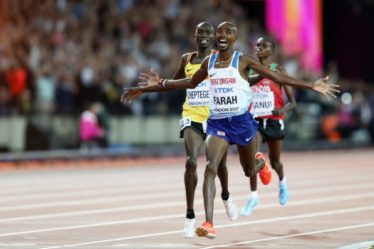 Paul Dacre – “That medal should have been mine too and I’d have sung the National Anthem.”

With Mo Fara’s track career nearing its end, the Daily Mail has shrugged aside pretence and slagged-off the runner for not singing the National Anthem after winning world championship gold. Again.

“He’s as bad as f*&king Jeremy Corbyn!” screamed Editor Paul Dacre across the newsroom last night, before being sedated with a tranquiliser dart by the Mail’s anaesthetist. Again.

Some little known facts about the UK’s greatest athlete, as helpfully revealed in the Daily Mail.

It’s not widely known that Mo is short for Mohamed, which is a Muslim name.

He was born in Somalia, which is abroad, in Africa.

He has six world championship and four Olympic golds which might have been won by home-grown athletes.

“He was also given a knighthood, which should have gone to a newspaper editor. Sebastian bloody Coe got a peerage.” sobbed Mr Dacre in the recovery room.

Comments Off on Daily Mail on Mo Farah: yeah, but he didn’t sing the National Anthem