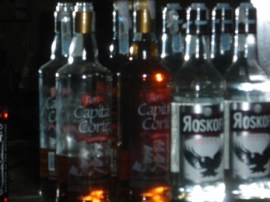 ‘Make mine a double’ I said to both barmen

If like me you find staying in with your family a teensy bit soul destroying of an evening, I can recommend a trip to the pub.

Dating back to 1957 and now largely asbestos-free, The Squirrel Licker’s Arms is a vital hub for village life.

And while the welcome you receive there could never be described as ‘warm’, it’s comforting to know the front door is very rarely locked.

The barman is known locally as ‘Eddie’, and once I’d plucked up the courage to ask, he explained that it’s because it says ‘Edward’ on his birth certificate.

As I gazed into his lazy eye and picked at the scurf on his vest, I imagined the easy charm that makes Eddie such a currently employed barman.

When he reached a mottled bicep to refill my plastic shot glass, it occurred to me that spending time with him was becoming ever so ‘moreish’.  A bit like the alcohol that I hadn’t touched for last 14 years.

So what can you do in a pub? The details were hazy but were slowly coming back to me: a game of darts or pool, catching up with village gossip, or selling your wedding ring to a stranger for just a few more drinks.

Activities like these have gone on in Harold for generations, and we can thank the pub for building the community we have today. Barely a teenage pregnancy goes by that can’t be traced back to the  ‘Licker’s outside toilets.

‘Eddie’s Top Shelf Challenge’ is said to have played a part in at least half of these, along with the barkeep’s famously nonchalant attitude towards fake IDs.

With this review covered by my expenses, it was time for one more go. Starting from the left, with a shot of Pedrov’s Charity Vodka, I tried to work my way through 37 bottles of the Kash and Karry’s own-brand spirits.

If you’re out of practice like me, you’ll struggle to make it past ‘Mr Popper’s Cherry Brandy’. But that won’t stop me trying again, at least three of four times a week!

Perhaps I can only dream of making it all the way through to the Rhino Gland Liqueur, or moving into Eddie’s flat so conveniently located above the pub.

But Eddie’s Top Shelf Challenge is an intoxicating game, and I for one may have become  a little bit addicted! It certainly put me in a frisky mood, so if you fancy giving me a go I’m open to all-comers. Just bring lots of money, and put a good word in for me with Eddie!