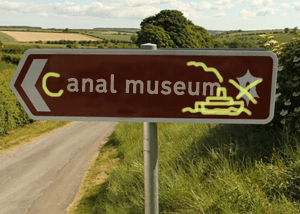 Vandals are sniffing out brown finger-posts

Villagers are proud of their museum of anuses, and its collection of rare sphincters and historical ring pieces. Located down a back alley between Harold’s twin bunshops, the damage to the sign has left some curious would-be visitors complaining that they’re struggling to gain access.

“For some reason, these puerile little sods think it’s funny to vandalise our sign, so it looks like we’re some kind of ‘canal museum’”, whined head curator Janet Brown.

“They might think it’s a harmless joke but they’re not the ones confronted by weirdos in captain’s caps and jumpers, carrying hand-painted kettles and banging on about locks.”

Janet Brown revealed that the graffiti has left her down in the dumps, because it detracts from the museum’s recent renovation. “As well as our draws full of bum-rings and hourly endoscope demonstrations, we’ve got a wall of tea-towel holders for the children to prod.”

“But thanks to these morons, the public are struggling to find our front entrance. I’m just glad a few have managed to squeeze their way in through the back.”

Brown wants it to be made clear that the museum barely mentions a single narrow boat, and people obsessed with canals won’t be made welcome.

“Steering from the rear as you barge through some grubby backwater? I’m not about to give that lot ‘permission to come aboard’. I never thought I’d say this, but I hate being surrounded by arseholes.”