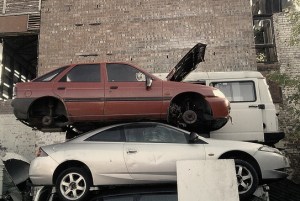 Call Mick for a test drive, bring your own wheels

And so it was with some trepidation and a bit of sick on my tie that I attended the ‘Launch Party’ for the new 1997 Ford Escort 1.3 L. Exclusively available in brown and with just three previous owners, Clarkson’s Cars ‘shitter’ is aimed at a select group of  emotional drivers who’s gout is playing up and are banging on his door just past midnight.

Mick Clarkson (no relationship) was happy to show me round the vehicle, after asking if I was ‘OK to drive’. That’s the sort of nanny-state obsession with safety that car manufacturers are working tiresomely to develop, and it nearly paid off on this occasion.

Equipped with the fuel warning light glowing and a strong smell of dog, the seats offer a welcome alternative to sleeping rough somewhere between The Squirrel Licker’s Arms and the caravan I grudgingly call ‘home’.

Curiously for an automatic, the car refused to change gear, and had a third pedal where you wouldn’t expect one.  Combined with a heavily blurred windscreen and starting to feel a bit hot, some more baby-bellied drivers might have filled up the cup holders.

Sadly, my journey was over all too soon, and I performed a three-point stop in a ditch. As I exited the vehicle through the convenient hatchback, I noted it had literally space for acres of dog hair.

Priced at £850 or offers the Escort is bound to attract buyers, despite my test drive highlighting a number of areas where the car isn’t perfect. But as Mick and I agreed over a pint the following day, we’re pretty sure most of that will polish out.