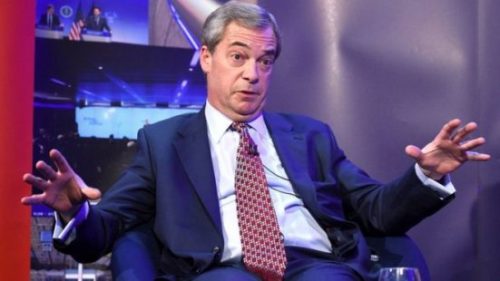 Kids are being urged to take back control of their bladders

Harold’s children have been asked to stockpile bottles of wee, in readiness for Nigel Farage’s nationwide tour promoting the wonderful benefits of a damned hard Brexit.

“It ticks several boxes,” said Harold headteacher Alison Lee “recycling single-use plastic bottles, building community by working together for a noble goal and of course, expressing our appreciation for being royally fucked-over by an angry commodity-trading multimillionaire bullfrog. We’d covered those points in years one and two, so this is a great opportunity for the children to put theory into practice.”

Lee says that parents will be able to join in when Farage speaks at nearby Dunstable but have been asked not to help their children too much. “It’s important for the kids to own their own work. Although they’ll be sharing it with Mr Farage in due course. Unless he’s on fire. The kids are very clear about that”.

With no apparent sense of irony, the Leave means Leave group has already hired a battlebus and is offering a prize to whoever comes up with the biggest lie, to be painted on its side and believed by idiots.

“So far the best one is ‘Nigel Farage: the finest Prime Minister the UK never had” said Nigel Farage “which is a great compliment as that accolade was previously reserved for Enoch Powell. Yes, he did ‘actually get elected as an MP’. What’s your point?”