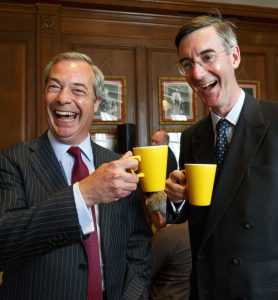 Jacob Rees-Mogg and Nigel Farage have urged everybody in the UK to cut off their noses to take control of their face.

Rees-Mogg explains that noses are a wasteful European body part as it duplicates the role of breathing in and out which is already done perfectly well by the British mouth.

“Why bother having noses just because those Europeans do? To smell you say? That makes no sense” said Rees-Mogg.

“If we all get rid of our noses we could use that space on our face for other more useful body parts. We could negotiate bespoke deals to get fingers from China, or perhaps some extra chins from the US. And of course the Commonwealth countries would line up to make body-part deals with us. It’s all about taking back control of the face.”

Nigel Farage agreed that Britains needed to cut ties with their noses as soon as possible, and by 29 March 2019 at the very latest.

“Brussels is riddled with noses, and they want to tell you what to do by insisting you have a nose. That’s not right – we didn’t win two world wars to have a nose right in the middle of our faces just like the Germans.”

“We should all cut our noses off and take back control of our face, and give the middle finger to Brussels while we do it.”

“Who needs 10 fingers? Those lazy Spanish and Italians maybe, but we British can operate perfectly adequately with 9.”