“Her nipples followed me round the room.” 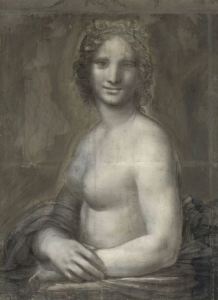 ‘Mona Lisa With Her Tits Out’

Da Vinci expert Mathieu Deldicque says he knew the charcoal sketch was authentic the moment he hung it on his dining room wall.

“Wherever I stood, my eyes were drawn to her enigmatic cleavage, and her nipples just seemed to follow me round the room. It’s definitely genuine.”

“Leonardo da Vinci was renowned for his meticulous research in the anatomical structure of the human body,” he said, “so it’s highly likely his first words to Mona would have been ‘Get yer kit off love’.”

The work was found in the Palace of Chantilly and was originally thought to be a sketch of a Florentine brickie.

Deldicque’s colleague at the Louvre, Bruno Mottin, says he is still cautious about the work’s authenticity because the background was filled in right-handed whereas da Vinci was left-handed.  But Deldicque insists that the artist was ambidextrous enough to cope.

“He could multi-task, too. He was probably shading in the background with his right hand while his left hand was engaged elsewhere in more sensitive work.”

Small holes pierced around the figure suggest that the drawing may have been used to trace the outline on to the canvas for the oil painting that hangs in the Louvre.

“Or maybe he used them as peep-holes,” said Deldicque. “Who knows?”

Comments Off on “Her nipples followed me round the room.”