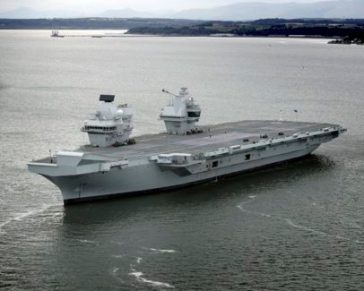 The Royal Navy’s biggest boat sailed into Portsmouth today and naval chiefs are already bragging about how powerful it will be, after its aircraft arrive in 2023.

“Don’t mess with us, is the message.” said Defence Minister Harriett Baldwin, who was once in the Sea Cadets so definitely knows what she’s talking about.

“This baby is as good as it gets, ooh yes…” said Baldwin, running her hand along a railing in a slightly disturbing manner, before adjusting her trousers.

“Once it’s up and running, if there’s an incident on the other side of the globe, HMS Queen Elizabeth will be able to get there in under 4 weeks. So, listen up Dayesh. Think twice before launching a surprise attack because we’ll on your ass sometime the following month.”

In the meantime, Baldwin says the UK will lease back the Harriers sold to the US for £200 a pop.

“We’ve also been in touch with the Shuttleworth Collection, with a view to borrowing their Fairey Swordfish replica”.