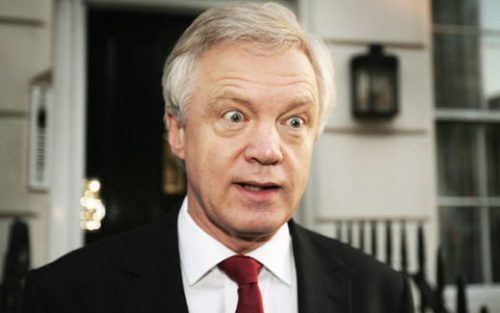 “Wibble.” David Davis, just after taking his pants off his head

The Minister for Exiting Our Right Minds said today that the Brexit process is great and a character from a 1970s sit-com, young Mr Grace, has told him he’s personally ‘done very well’.

Speaking on R4’s Today programme this morning, David Davis took his pants from his head, two HB pencils from his nose and explained that the lack of clarity, over the government’s plan, is intentional, calling it “constructive ambiguity”. No, really, that’s what he said. We didn’t make it up.

Mr Davis emphasised that the success of this approach depends on two factors. “First, the EU shouldn’t know it’s intentional, so I’ve told both of our negotiators to keep it top secret.”

“Second and this is the doozie, I haven’t actually got any plans. If I did I might blurt it out when I’m excited. How clever is that, eh? Job’s a good’un.”