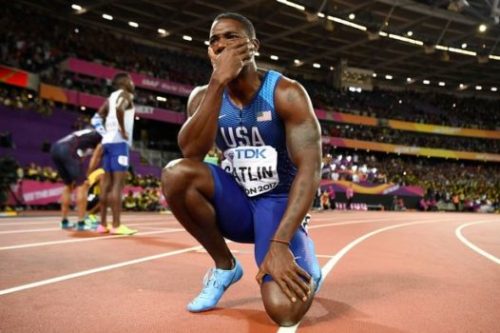 Men’s 100m World Champion Justin Gatlin has paid a touching tribute to professional weasels and to the pharmaceutical industry.

“Without those guys I wouldn’t be where I am today.” said Gatlin, his eyes bulging; a sentiment shared by 99% of spectators in the London Stadium, most of whom would rather have seen Pol Pot’s evil twin brother win the race.

He was first rumbled as a drugs hoover in 2001 but his ban ended early, when lawyers argued positive tests were due to his attention deficit disorder. Apparently Gatlin ‘drifted off’ thinking about yachts, fast cars, and other trappings of athletic success, when he was actually supposed to be reading the helpful IAAF leaflet “Don’t take these drugs or you’ll be banned”.

An excuse offered for his 2006 offence, that a malevolent masseur had rubbed drugs into his buttocks, didn’t convince the IAAF but was shortlisted for The Man Booker Prize.

Gatlin points out that lawyers helped slash whole years off his suspension times, whilst drugs only shaved tenths of a second off his sprint times.

“So, if you put them in context, the drugs haven’t helped much at all.”