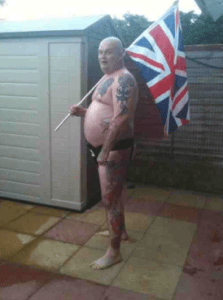 Gavin Mitchell says he doesn’t regret his Brexit vote even though a river of shit is running from his bathroom to the living room.

“Actually I’m proud of this river of shit” said the Britain First member. “It’s a symbol of how patriots like me stood up to those Eastern Europeans who were taking the piss, and, as it happens, taking the shit.”

Mitchell said living in a rapidly growing torrent of excrement was a small price to pay for taking back control of Britain’s drains and sewers.

“No longer will Piotr the plumber and his mates take jobs that my friends and I could hypothetically have got if we had some qualifications and if we’d been bothered applying.”

“Success has never smelt so sweet” said Mr Mitchell, as he stood at least 100 yards upwind of his house.