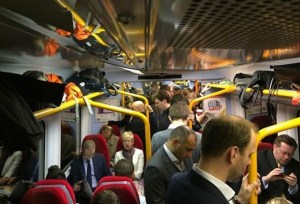 Holding the Olympics in a place other than London is causing transport chaos as people aren’t taking holidays to escape or working from home, according to London commuters.

“Bloody selfish” says Surbiton commuter Sean Nunean. “The government should’ve ensured London held the Olympics again so people like me can get a seat on the 8.27am to Waterloo.”

“I’d have been prepared to be polite to other passengers for two weeks, if that’s what it took” said Mr Nunean. “Heck, I’d even have considered smiling at a Games Maker this time.”

Nunean said he was at his wits end coming so soon after Brexit failed to deliver the promised economic collapse, and follow through of people vowing to leave, that would’ve freed up seats.

“Bloody annoying” said Nunean, as he elbowed his elderly mother to get some more standing room.