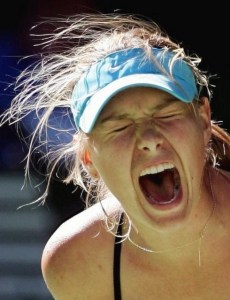 Maria Sharapova let out an orgasmic scream of delight on learning her 2 year ban only applied to tennis, and not grunting or screaming.

One of the top screamers in the world for a number of years, Sharapova expected to be silenced for taking volume enhancing drugs, but incomprehensibly authorities only banned her from hitting furry green balls.

Fans of peace and quiet were outraged by the leniency of the ban saying previously they could avoid being disturbed by Sharapova’s guttural exhalations by simply not going to a tennis tournament. Now it was not safe to leave the house least they be exposed to Sharapova’s trademark rendition of a maternity ward full of women all giving birth to triplets at the same time.

Sharapova said she didn’t care what people thought, or at least that it was the Evening Harold took from her comment ‘AhhhhhhhhhhhhhhWWWWWWWWUMMFFFUUUUUCKKKKKKKKKKKKKOFFFFFFFFFeeeeeeeeWWWWWW.’