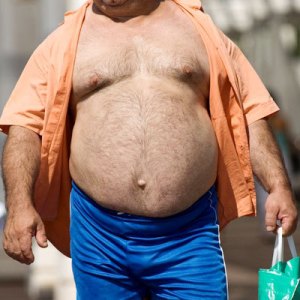 His colour sense isn’t that great either

In the quiet English village of Harold, a local council is making a stand against the anti-social wearing of shorts by men.

“The first decent weather of the year saw men out and about in shorts which were already too small in 2015.”says Cllr Ron Ronnson.

“Oddly, most of the shorts hadn’t stretched in the back of the wardrobe, hidden under a 2012-2013 Manchester United scarf and a replica ‘Thierry Henry’ Arsenal shirt.”

William McKean, Harold’s largest man and star of the documentary Help! My Liver is the size of a Dog, describes key indicators for when to drop your shorts. “If your waist’s larger than your chest, if you’re still wobbling after you stop walking, and if you’ve passed your 12th birthday.”

Emergency powers granted by the council will mean Ascot-like style judges at this summer’s Wasp Festival. “The judges get to flick all shorts- wearing men” explains Ronnson “If they jiggle for more than 10 seconds post-flick, they’ll have to cover up and to wear a humiliating set of deely-boppers.”

One Response to Village bans wearing shorts, by men with waist > chest