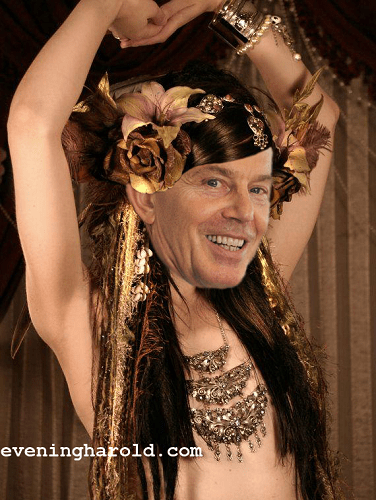 We’d pay to make it stop

Fears are growing that Tony Blair will do anything for money after if was revealed that he now performs nightly belly-dances for Saudi royalty.

Blair is known to have a wide range of opaque business interests, but it was never suspected just how far the former Prime Minister would go for cash until details of his fleshy writhing leaked out.

The Middle-East envoy role held by Blair included a certain degree of consultation over business affairs, but many are shocked to see him stripping nearly naked and wriggling lasciviously for the pleasure of the Saudi royal family.

A spokesman for Blair admitted that exotic dancing had happened, but denied that it was in any way inappropriate.

“It’s not like he’s advising savage dictators in Kazakhstan,” he pointed out.

“That was last week.”