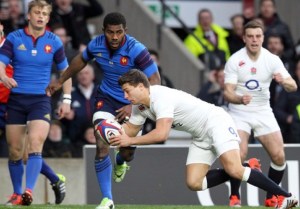 How could the ref miss this handball?

A lucky England has the referee to thank as they completed a 6 Nations Grand Slam despite numerous handballs, according to the Daily Mail’s Chief Football Correspondent Matt Lawson.

Mr Lawson said he didn’t want to diminish England’s triumph, but by his count the referee and his linesmen missed over 100 handballs, with players often blatantly throwing the ball to each other before finally kicking the ball. Add in the penalties that soared over the crossbar, and it was clear England had the rub of the refereeing green.

“The ball was picked up so many times I don’t blame the French for getting so frustrated they attempted to tackle the English and stop them in their tracks. The game really needed a Mark Clattenburg to take control of the situation rather than the clueless bunch of foreign officials on the field.”

Mr Lawson said even more ridiculous was the referee and linesmen failing to notice England fielding an extra four players.

“It was like they were watching a different game” said Lawson.

Despite the officiating errors Lawson said he enjoyed the game, especially the unusual attacking ploy where the English bound together and stuck their heads up each other’s bottoms to slowly advance on the opposition goal.

“The attack was so slow moving it reminded me of Aston Villa’s leaden footed strikers, the difference being England put the ball in the back of the net so fair play to them. Well apart from the fact it was yet another handball” said Lawson.