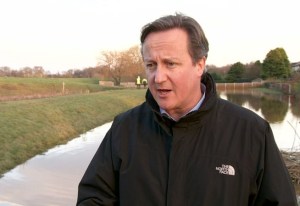 An astonished David Cameron has found a direction called ‘North’.

“I’d heard about it in Smiths’ songs, but never for one moment thought it was real. My moral compass only showed a ‘South’” explained the Prime Minister.

“As directions go, ‘North’ isn’t too bad” said Cameron. “It’s no ‘South’, of course, but I saw a few foxes that escaped the flooding that might be worth hunting. And the people there were very welcoming, chanting ‘Tories Come!’ wherever I went.”

Cameron said his discovery of ‘North’ made him wonder whether ‘East’ and ‘West’ also existed, but he’d look into that after he got back from his Christmas holidays in the South of France.