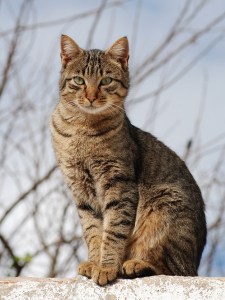 Forever in my heart Miffy

Grieving Harold cat owner Julie Kettle’s decision to use a photo of her cat Miffy as her Facebook profile picture has seen her be criticised for ignoring and not being sad about other people’s dead pets in Beirut and Baghdad.

Miffy, a tabby cross of uncertain parentage, was tragically killed last Saturday when crushed by a large crate of halal meat that fell from a passing truck. A distraught Ms Kettle changed her Facebook profile picture to show Miffy, and added a post saying “My beautiful tabby baby – forever in my heart. RIP Miffykins.”

The profile picture and comment was initially well received, and by early Sunday some of Ms Kettle’s friends showed their support by also changing their profile pictures to Miffy. But by late Sunday, the social media tide turned against Kettle and her self-absorbed friends.

“Sad about Miffy, but also equally sad about the 10 Guinea pigs accidently poisoned by an Israeli sausage in Beirut” posted Simon Delaney.

“Seeing a lot of people upset about Miffy but no attention whatsoever to Abdul the terrier cross who was run over in Baghdad” posted Brian Green.

National columnist Lulu Nunn from the Independent even entered the fray tweeting “You Euro-centric, narcissistic, middle class white people with your faux Miffy sympathy make me want to puke.”

A chastened Ms Kettle said she now realised how selfish she was, and she changed her Facebook profile picture to a collage of recently deceased animals from all around the world.

“I know it’s no excuse, but Miffy slept on my bed every day of her life. I KNEW her. Her death came as a devastating shock which is why I posted the Miffy picture” explained a tearful Kettle.

“I’d always thought I was a caring person but I now see myself for the monster I’ve become – the guinea pigs and Abdul had a mother too” wailed Kettle.