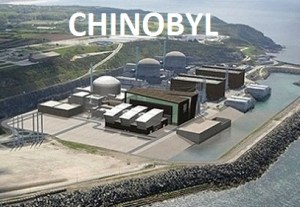 A public vote on the name for the new Chinese funded nuclear power plant at Hinkley Point, Somerset has resulted in ‘Chinobyl’ being chosen.

Red-faced officials said they thought locals naming the nuclear power plant would help the controversial project gain acceptance, and they expected something like ‘Hinkley Point power plant’ or ‘Xi Jinping power plant’ to be chosen.

“Instead we’ve managed to offend the Chinese and Russians in one fell swoop by calling it ‘Chinobyl’” said Treasury official Derek Shima. “I suppose we’re lucky they didn’t chose ‘Chinkley Point’.”

Mr Shima said he went down to Somerset to have a conciliatory cider with the locals but almost had a meltdown when he found they’d named the road to the power plant ‘Three Mile Lane’.

“I thought they’d be grateful when I pointed out the Chinese funded nuclear power would create 25,000 jobs” said Mr Shima.

“I certainly didn’t expect them to say ‘Fuk u Shima’.”