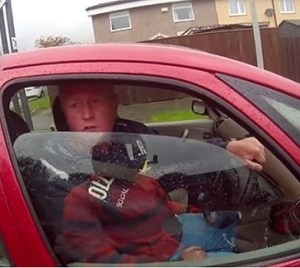 The logic behind Trident is to deter a nuclear attack on the UK because, even if normal defences were destroyed, the submarine carrying the weapon could still launch a devastating retaliatory attack. Corbyn believes this same deterrent can be achieved with the threat of Ronnie Pickering offering to step outside for a bare-knuckle fight with anybody that nuked the country.

“Nobody wants to see nuclear war, so why spend billions each year maintaining a defence system that is the stuff of absolute nightmare when that money could be better spent elsewhere?”, said Corbyn,

“I would not renew Trident, but I would not leave the UK defenceless. So instead of having a submarine we would have Ronnie on constant patrol in his red Citroen Xsara Picasso. He could be anywhere in the world, ready to drive to any country that launched a nuclear attack against the UK, pull up alongside them and threaten to knock them out.”

Mr Corbyn says this plan would save billions as Pickering does not need a whole industry to keep him in a state where he is angry enough to act as a deterrent to would-be attackers, just one man on a moped.

“Admittedly a Citroen Xsara would take longer to get to an attacking country than an intercontinental missile. But they would know that one day, soon after they launched an attack, they’d hear the blast of a car horn from behind them and then ‘Do you know who I am?’ yelled out of the window.”