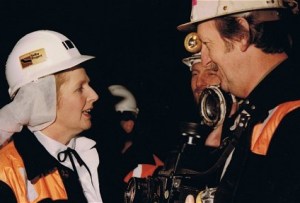 Thatcher about to enter a miner’s hole

An investigation into Margaret Thatcher allegedly abusing over 150,000 miners has stalled after Police failed to find any trace of a mining industry let alone any miners.

“Most of the abuse was alleged to have occurred up North but no matter how many holes in the ground we peered into, or broken communities we visited, no miners could be found” said a Scotland Yard spokesman.

“We now suspect Thatcher may have hid them on a very large yacht.”

What could have motivated Thatcher to commit such wide scale abuse is the subject of speculation, with some saying ‘New Right Orthodoxy’, and others saying ‘She’s a very nasty bitch’, but the Police spokesman said there was more to it than that.

“You don’t close 150 mines and put over 150,000 miners out of work just because you are right-wing and nasty, though it certainly helps.”

“We think she was a committed pitophile”

Comments Off on Police investigate whether Thatcher abused miners