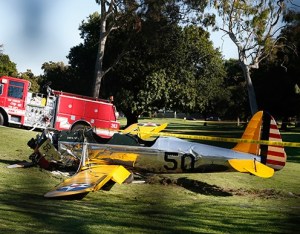 A relieved Harrison Ford is thanking his lucky stars that a plane crash on a golf course left him too injured to play.

“Oh God, that was a close one … I could have been seriously bored out there. You take life for granted and then suddenly you are seconds away from playing golf. You wouldn’t believe the relief I felt when my femur snapped” said Ford.

Fans had an agonising wait to learn Harrison’s fate with rumours swirling that he had been rescued from the plane, dressed in tweed trousers, and made to complete a four with two doctors and a corpulent lawyer known as Jabba the Putt. Confirmation that Ford was in fact seriously injured was met with sighs of relief.

Ford says he has learnt his lesson. “Next time I will crash my plane somewhere far more interesting, like the set of my latest film ‘Star Wars: Episode 7: the Force Awakens’, to be released late 2015. I can promise you it is the best Star Wars film yet, and everybody should go see it so I can afford to buy more planes.”

Comments Off on Harrison Ford narrowly avoids round of golf