Pardew’s Newcastle team talk “Loyalty. You can’t buy it, but you’ll know it when you see it”

“Once the Pardew Out banners went down” said the manager who’s left behind him the longest contract in UK football history “I thought, ‘Right, you Geordie tossers. I’m off to London, soon-as’.”

Pardew believes the best way to thank owner Mike Ashley for standing by him, whilst his squad played like a Sunday pub team, was to clear off whenever he got a better offer.

“Ideally I’d have nutted one of the ‘sackpardew.com’ organisers before getting on me bike back to the smoke but you can’t have everything in life. Although a few £million a year certainly goes a long way.”

Crystal Palace’s owners are a shade less loyal to managers than Mike Ashley, with Pardew their eighth appointment since 2010. Their s long-suffering handyman has wisely only written ‘Alan Pardew’ on the manager’s door in felt-tip. 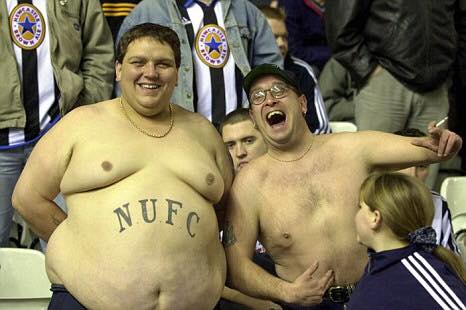 Toon army hears the news that Pardew’s gone. His salary had taken the shirts off their backs