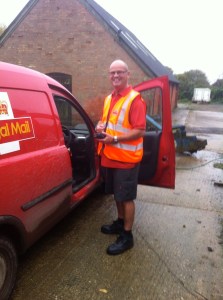 In what is already being hailed one of the greatest ever relationship feats, Harold postman Brian Green correctly interpreted his wife’s silence and provided the appropriate emotional response.

The extraordinary feat was achieved on a day when both spouses had busy days at work and Rachel Green cooked steak and chips for dinner. Mrs Green’s mind must have been elsewhere as the steak was overdone and the chips were a little soggy, a departure from her usually high standards that Mr Green wisely didn’t pass comment on.

Very unusually Mrs Green remained completely silent throughout dinner (she usually comments on the accelerating decline of television) and she gave off no ‘looks’ and uttered no ‘sighs’ – for all intents and purposes there were no ‘cues’ whatsoever.

A modest Mr Green admitted the situation seemed hopeless and he had no idea he was about to achieve the holy grail of human relationships.

“There was just extended silence – if Rachel had thrown her fork at me I would have guessed ‘anger’ but there was nothing. But then everything just clicked and I got up and loaded the dishwasher after rinsing the dishes first. I then led Rach to the lounge and gave her an extended rather than cursory back massage, while remarking how she looked years younger than her little sister who is actually 5 years younger than her. I crowned things by not even asking Rachel for a shag, though there was an element of luck to this as I was actually feeling a bit peeky.”

Brian Green said the achievement was all the more rewarding when he looked back to the earlier years of his marriage and realised how emotionally stunted he was.

“It is embarrassing what I was like back then. It was just the basics – when she seemed happy I’d ask for sex and when Rach seemed a bit down I’d merely hint at sex or perhaps ‘jokingly’ ask for a blow-job. But then I noticed she started leaving a pair of scissors on her bedside table and I realised I needed to improve.”

“After a while it dawned on me that when we had an argument and she exasperatedly said ‘you win’, it actually meant ‘I lost’ and I would quickly apologise. And when I suggested something and Rachel said ‘great idea’ while lowering her eyebrows, I knew my suggestion was unwise and I’d quickly apologise and ask for her thoughts.”

Mr Green said his achievement in correctly interpreting his wife’s lengthy silence meant that he was now considering the even more improbable feat of safely answering the ‘does my bum look big in this’ question.

Sadly though Mr Green will have to attempt this with a new partner as an intermittently sticky ‘A’ key on his cellphone meant he sent a very explicit text message to his wife Rachel rather than his work colleague Rachael. Rachel was slightly confused by the text’s reference to ‘nal intercourse’ but still kicked Brian out to be on the safe side.

Filed under Around Harold, Sex

Tagged as battle of the sexes, interpreting a woman's silence, relationships