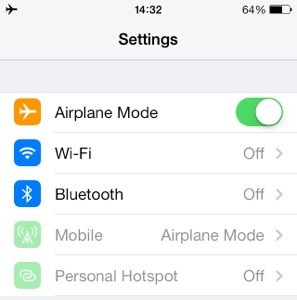 A man has said he is disappointed, upset and overall confused at the new charges on his recent mobile phone bill. The new fees included excess baggage, extra legroom and a large fee for paying his bill by credit card.

“I called my provider and they confirmed the new charges were a result of me putting my phone into ‘airplane mode’,” he told us.

“And when I tried phoning my mother the other day, I was told I couldn’t get on that call because I was ten minutes late. Luckily they had space on a call five hours later but I did have to pay £150 for the privilege.”

His mobile network provider told us their new charges for anyone putting their phone in airplane mode were standard with the charges in the airline industry.

“All the ‘extras’ are outlined in the small print, just under the bit that says ‘get everything you need for £1-a-month’,” a spokesman explained.

“But the changes are not all about us extorting more money from customers, it also comes with some benefits.

“We all know smartphone are just computers, and computers have faults. That’s why for just £40-a-month more, every time your phone crashes an oxygen mask will fall out.”