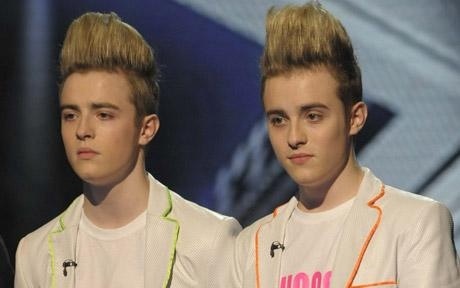 Shanghai may have clever kids, but do they have Jedward?

The UK has fallen outside of the top 20 in a world league table of educational standards, a result seen as “positive” by X-Factor creator, Simon Cowell.

“Having an education is one thing, but aiming for a decent career takes away people’s ambition to be famous for five minutes,” Cowell said.

“What would you rather see on your television on a Saturday night? Someone with maths and science A-levels looking to go to university to study with the ultimate aim of becoming a doctor, or an unemployed tone-deaf teenager that thinks they are the next Maria Carey but without the talent. I’ve never had a good laugh the contestants on university challenge.”

In the UK, Wales has come below the other countries in all subjects, a fact Mr Cowell claims is linked to the success of Tom Jones.

“He has shown that proud nation that an education is unnecessary when you could just thrust your groin around on stage. And what better place to do it than in front of a prime time audience.

“Giving me and other judges the opportunity to mock you will make you an instant local celebrity giving you the kind of fame no amount of homework could give you.”

Cowell is now petitioning for the permanent dumbing down of the education system and to get schools concentrating on producing the stars and deluded people for the future of Saturday night television.

“We should be proud of our failing education system,” Cowell added. “We may be getting thicker and thicker, but when it comes to subjecting people to ridicule so they can be famous for five minutes, we’re world beaters, and that’s what really matters.”