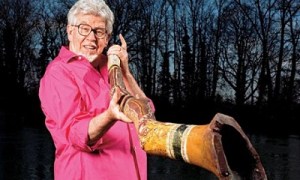 Rolf claims it was a didgeridoo in his pocket

The BBC is rethinking its approach after realising the 180,000 people it prosecuted in the last year are getting to watch alleged BBC sex offenders in court for free.

“We wanted to clamp down on free-loaders who were watching TV without a licence and thus not contributing to our presenter’s exorbitant salaries” said a spokesperson for TV Licencing. “If everyone dodged the TV licence, the presenters would not be able to afford to pay for basic grooming items, such as lollies and an XBox360.”

“But unfortunately all the people we are prosecuting are getting to see our presenters up close and personal in court without paying any sort of licence fee – in fact it is not paying a licence fee that it is getting them a front row seat.”

Harold shopkeeper Julie Kettle couldn’t believe her luck when preoccupation with caring for her gravely ill mother meant she overlooked paying for a TV licence and then was prosecuted.

“There I was in court as Stuart Hall took his turn in front of the Judge. To say I was star-struck was an understatement! I rushed home to tell mum the news but sadly she had passed away. Even so, it was still a great day.”

Kettle said she was looking forward to not paying her licence fee next year and perhaps seeing a BBC newsreader or comedian in court.

“My first pick is to share the dock with Russell Brand because he is so cute, but apparently being an opinionated prick is not a criminal offence by itself” said Kettle. “Perhaps someone could check whether he has paid for a TV licence?”