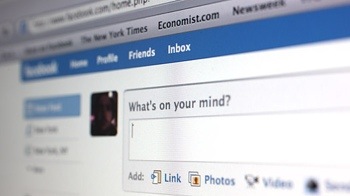 There was a shock winner at the Evening Harold Online Literary Awards last night, with the main prize, online writer of the year, going to the relatively unknown local girl Melanie Delaney, 19, for her autobiographical writings on Facebook.

With her friends being kept informed of everything from the idiots on the bus on her way to work, to her decision to use a break in ‘X-Factor’ to ‘pop to the loo’ resulting in her weeing in record time, the judges agreed that no other online writer produced such a detailed account of anything else throughout the year.

“Not only did she give us an insight into how she was feeling with just a single emoticon, she also added mystery and intrigue with updates such as ‘not again’, ‘arse’ and ‘*sigh’”, one of the judging panel explained.

“These updates kept her audience engaged with many not being able to wait for the next instalment and demanding to know what happens next. Not even JK Rowling had people saying ‘you can always call me babe’ so they could find out what happens in the next Harry Potter book.”

Her award was presented by Councillor Ronnson who said that since she accepted his friend request six months ago, he has been enthralled by every update. When giving out the award, he was also full of praise for the photographs that often accompanied the chapters of her life story.

“I often find with other Facebook authors that I can’t believe some of the ‘crazy’ things they claim, such as eating something as exotic as a chicken korma for dinner, but with Melanie I always get photographic evidence. And her thousands of poorly lit ‘night out’ photos prove she did indeed purchase a new white thong as reported earlier that day.”

Accepting her award, Miss Delaney said she never really considered herself a writer, but the self-obsessed part of her could see why people would have more interest in reading short updates about her life than reports from ‘real’ journalists about Egypt, austerity or any other news story that was not about her.

Some were critical of the decision, and have accused Miss Delaney of being a fraud. One such critic told us ‘I have been watching her all night to see if she was actually anything like her online ‘persona’, and I think it is safe to say she didn’t ‘laugh out loud’ nearly as much as her updates claim.”

Comments Off on Prestigious literary award given to local teenager for ‘detailed Facebook updates’.