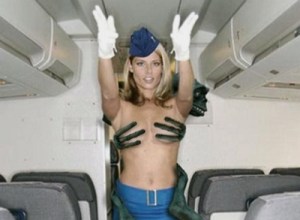 A flight attendant today broke down and issued tearful apologies to passengers affected by a five hour delay of a Ryanair flight into Dunstable International Airport.

Mandi Jones, a 23 year old flight attendant from Harold, was overcome with emotion and wailed uncontrollably after realising that the 243 passengers had not only suffered an uncomfortable 4 hour wait in a crowded cold departure lounge, but had also had their onward travel plans disrupted.

The five hour delay was unavoidable due to a severe storm that affected both the departing and arrival airports, but that didn’t stop a sobbing Jones from personally apologising to every passenger as they left the plane. As a further gesture, Jones went as far as letting elderly male passengers touch her pert air hostess breasts as they exited.

For their part, the passengers remained calm as they filed off the plane. “I know the lass was upset but unavoidable delays are just one of those things” said Harold statistician Doug Walker. “As seasoned travellers, it is our role to be professional at all times even when the cabin crew lose it.”

After the last passenger had departed, Mandi was still racked with guilt and rushed to the baggage carousel to both help passengers with their luggage and to personally apologise to waiting friends and relatives.

Unfortunately the gesture ended badly when Jones discovered most of the luggage had not arrived due to a labelling mix-up caused by a software glitch. A now suicidal Jones begged the passenger’s forgiveness as she plunged a plastic knife from an airplane meal into her abdomen.

Ryanair boss Michael O’Leary issued a rare apology as he tried to draw a line under the unusual incident. “Genuine apologies are not part of our standard practice. As soon as the flight attendant is out of hospital (unpaid leave of course) I’ll be reminding her to stick to the script and either offer delayed passengers a short insincere apology or tell them to feck off.”