Tom Cruise revealed as new Doctor Who, Daleks to be shortened 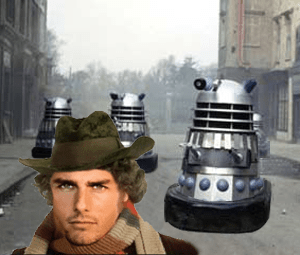 Actor Tom Cruise was said to be ‘ecstatic’ this morning at the news that he is to become the next Doctor Who, following the decision by Matt Smith to leave the series after three years.

“I can’t explain how excited I am to find out that, unknown to me, I am the twelfth incarnation of the Doctor, thus at last freeing me from this Earthly domain to roam amongst the stars,” he confessed to Hollywood journalists this morning.

“I’d always suspected that I was not from this planet, but instead from somewhere like Gallifrey, where people aren’t afraid to tell the truth and everyone is slightly shorter than they are here.”

There are some concerns among the show’s producers that Cruise has failed to realise the fictional nature of the Doctor Who character, and has instead mistakenly assumed he is to appear on some sort of documentary. It is believed that with a sufficiently persuasive script, the actor may not notice what is going on, and to this end some old episodes penned by Scientology founder L Ron Hubbard himself have been hastily uncovered.

“We Scientologists believe that the human body is just the shell for a Thetan, and that the number of previous lives of a Thetan are immeasurable”, said Tom. “But after speaking to Steven Moffat, for artistic reasons we’ve set that number at 11.”

Moffat was pleased to welcome Tom Cruise on board the show and quipped that ‘doctors called Tom have always been great’, revealing that for nostalgia purposes, Tom Baker’s old scarf and hat would also reprise their roles.

But recruiting the new Doctor hasn’t been without its difficulties. “Unfortunately, Tom Cruise has rather blown our budget”, confessed Moffat. “It’s not his fee that’s the largest cost, it’s shortening all the Daleks by a couple of feet”, he explained. “Although we should make some of that back on the action figures: they’re the first to be sold that are roughly scaled at 1:1.”

Comments Off on Tom Cruise revealed as new Doctor Who, Daleks to be shortened