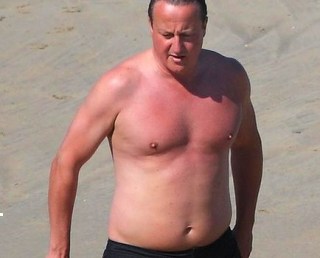 Unhappier times for the Camerons – in Cornwall

“Once you realise that – no mystery.” drawled a chillaxed David Cameron from a sunny beach.

“Good PR at the time – I did that before I became an MP as well, you know. Sun’s a bit fierce, would you mind shifting the umbrella to the left? No more Cornwall for me, thank God – I was lying about that too.”

Minister left with responsibility for the mess, Edward Timpson thinks the £1.3 Billion initiative should have gone to middle-class families who would have spent it on nice things, rather than flushing it down the toilet on the poor.

“We’d hoped for referrals on families who were too loud for their neighbours to bear. Say, for example, people likely to wear checked trousers with a striped shirt. Or hawaiian shorts. But some of the oafs were criminals who used drugs and I don’t mean the odd line of Gideon. There’s nothing a government can do with people like that,” said a defeated Timpson.

“Not one self-starter among them.” He added, ” Would it kill these people to be interested in Viennese baby yoga or set up a community West Asian Jazz Festival?”

Comments Off on Differing reports on Troubled Families explained: “I was lying” says Cameron