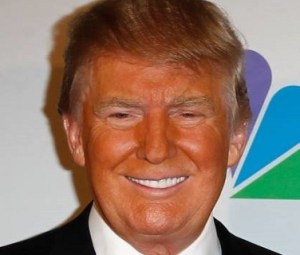 Shortly after a Thai cosmetics firm was forced to withdraw its ‘racist’ skin-whitening cream, an American company has stopped selling a leading skin-browning product after it was criticised for discriminating against idiots.

The television advert for the “Oompa” product shows a user named only as ‘Donald’ attributing his success to his ‘superior brown skin’, despite the fact that he is clearly a bright orange colour, resembling nothing more than a soggy Jaffa Cake after all the nice chocolate bit has been nibbled off.

“My world is a tough world,” says ‘Donald’ in the ad. “Without my beautiful brown skin I would not command great respect, and people would think I am stupid.”

The company behind the product issued a ‘heartfelt apology’, saying it had not meant to offend, and accepted that the statements in the advert were ‘entirely false’.

“Hand on heart, we admit it,” said a spokesperson. “He’s not brown, he’s orange, like the burning fires of hell, or a big carrot.”

“Also, he commands no respect at all, and is frankly very stupid. We hope that clears it up.”

Comments Off on Skin-browning product banned for ‘discriminating against idiot’