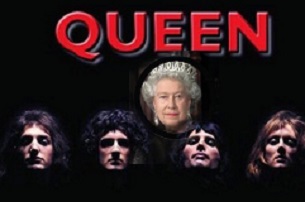 “One is the Champion”

By popular demand from Her Majesty’s subjects, we are commanded to provide a further gloved handful of facts about the Queen who is long reigning over us. These facts are just as true as the last set.

Fact! As an in-joke, the rock band Queen asked the actual Queen to sing backing vocals on one of their songs. After being smuggled into the band’s private recording studio at night, Her Majesty can be heard singing the “Are you gonna take me home tonight?” lines on “Fat Bottomed Girls“.

Fact! Prince Charles is so old that most people assume the Queen is his child, but it’s actually the other way round.

Fact! Her Majesty attributes her soft hands to her insistence that her maids always use Fairy Liquid when washing the Royal dishes.

Fact! HM doesn’t just breed corgis; she’s also trying to create a bipedal lion and unicorn. Her ambition has always been to reintroduce the creatures from the coat of arms into Scotland, and perhaps have them win Strictly Come Dancing.

Fact! Just as with her birthdays, the Queen has two vaginas. One is reserved for official occasions such as the Opening of Parliament.

Fact! Her Majesty actually died 12 years ago but has maintained her role as Queen through sheer force of will and the determination to thwart Charles and Camilla in their lifelong aim to take over Buck House and turn it into a refuge for lonely trees.

Fact! In a rebellious moment in 1977, the Queen ordered the Sex Pistols version of “God Save the Queen” to be played at the end of the Festival of Remembrance in the Albert Hall. A rethink was prompted following an unfortunate dress rehearsal when a Chelsea Pensioner had a heart attack and a regimental goat shat itself. Err …. that may have been the other way round!

Comments Off on The Queen: More astounding facts!