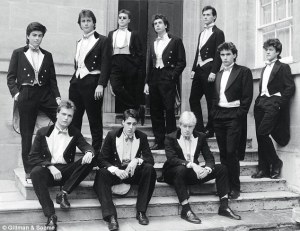 Ye are many – they are few.

The Attorney General, Conservative MP Dominic Grieve, has warned that politicians need to ‘wake up’ to the problems of corruption in minority communities and cited the Bullingdon Club as a particular cause for concern.

The all-male Oxford University dining club counts David Cameron, George Osborne, Boris Johnson and Lord Voldemort amongst its past members has a reputation for exclusivity, a predilection for smashing up restaurants, and generally encourages its members to behave as if they were part of a parallel universe Drones Club in which fun has been replaced by a level of arrogance not seen since Charles I.

In an interview in the Daily Telegraph Grieve said that many Bullingdon boys: “have been brought up to believe you can only get certain things through a favour” and that massive inherited wealth was a greater indication of competence than skills, experience or intelligence.

He then seemed to both backtrack and widen his target by saying:

“Yes, it’s mainly the posh boy community, I’d be wary of saying it’s just a Bullingdon problem. It’s also a problem when anyone lives in a bubble of privilege and has no understanding of how ordinary people live while believing that they are entitled to sit in judgement over them.”

Grieve identified the City as an example of widespread corruption and tax avoidance which due to the posh boy community closing ranks and looking after their own consistently goes unregulated and unpunished.

He also said that the influx of posh boys into the government and the City is causing other problems saying that they “may pose serious infrastructure issues” which was quickly refuted by Number Ten.

“There’s only one infrastructure issue,” a senior Downing Street figure told us off the record. “And that’s how much money we’ll make when we sell it off. Toodle-pip.”

Comments Off on Attorney General warns of corruption in minority communities. Bullingdon Club particular cause for concern