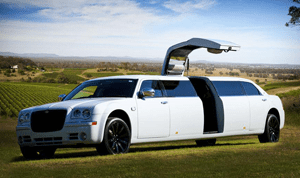 Mayor hopes car will support ‘up to six hookers’

Local Mayor Rufus D Jackson has reacted swiftly to criticisms of his austerity programme, by buying an ‘absolutely enormous’ car.

With budgets for the local library, citizen’s advice bureau and most bin collections cut by up to 100%, some villagers had started to question how this would lead to more growth.

But while Jackson admitted that the tactic was causing hardship for the sort of people he didn’t care for, he insisted that owning a massive car would help cheer up those that mattered the most.

“A stretch limo with three axles and one of those twinkly sky headlinings is just what we need to stimulate interest in the high-class hooker sector”, suggested Rufus.

“And the stains on the white leather interior have already created work for a team of Polish valets, who might otherwise find themselves loitering outside the community centre, wondering why it’s still closed.”

The Mayoral car is just the first in a series of measures, which Mayor Jackson insists will attract anonymous investors and unlicenced pharmaceutical dealers to Harold.

“You won’t find many overseas businessmen propping up our sleepy little economy, unless we open a casino, a strip club and a colossal hotel in the shape of some tits. I didn’t get where I am by sleep-walking into a recession.”

“I got here bound and gagged in the boot of a 40-foot long stretched Cadillac, after a misunderstanding with some of my associates.”

Critics of Jackson have accused him of financial impropriety, a criticism he plans to tackle head on. “It would be wrong for me to comment during your paper’s current investigation, and I believe actions speak louder than words”, he explained.

“If my acquaintances taught me one thing, it’s to believe in the strength of duct tape and powerful torches at night, and the importance of knowing where there’s a dumpster in Dunstable.”

Rufus D Jackson was applauded by the throng of journalists, who hardly noticed that he had some coke round his nose. As one hack observed, “it can be very easy to criticise Rufus D Jackson, but it gets a bit harder if he knows where you live.”