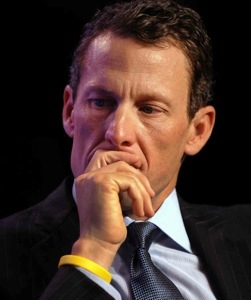 Following his withdrawal from a swimming championship in Texas, Lance Armstrong has been sent an invitation to compete at St Mary’s CofE Primary School’s sports day in May.

The annual event falls outside of the jurisdiction of any anti-drug agencies that have imposed a lifetime ban on all competitive sport for the disgraced cyclist, leaving him free to participate in the parents’ races including the 100 meters dash, the sack race, and the highlight of the day, the elite egg and spoon race.

“We understand he brings a lot of baggage with him,” Mr Thomas, the school’s P.E. teacher told us, “But rest assured that baggage will be searched thoroughly. Having Mr Armstrong compete will raise the profile of the school and help us raise money for our minibus to be adapted with black paint to accommodate our local Goth community.”

Although the prospect of having someone who didn’t win the Tour de France compete in the village has caused some excitement, others have been quick to point out the damage that may be done to the integrity of the sports day.

“I don’t really care about the performance enhancing drugs he may be taking,” one disgruntled parent told us, “It’s the fact he has no children at the school I have a problem with. Okay, I’m not 100% sure where the village of Texas is, but I am sure it’s not within the catchment area.”

The controversy does not stop at Mr Armstrong’s involvement in the competitions, but extends to the suggestion he may also be asked to set up a stall offering children performance enhancing advice and injections, a move the school defends stating ‘all profits will go towards the minibus’.

However, Offsted have said they will look into claims the school made enquiries to see if Oscar Pistorius’ Bail conditions prevented him from teaming up with Lance in the three-legged race.