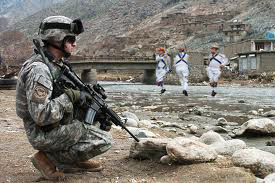 This soldier praised for resisting the urge to shoot

A decision to allow both Harold’s branch of the Territorial Army and the village’s morris dancers to share use of the village hall is to be reviewed. This follows a transportation error which saw the whole flange of morris dancers deployed to Kabul, Afghanistan.

The jingling hanky wavers were due to travel from the hall to Sidcup for the National Prancing Championships. Unfortunately a coach was also due at the hall to take the TA to RAF Brize Norton to fly out to the war-zone and take up a combat role against the Taliban, a coach the morris men accidentally but keenly boarded.

“We thought the 8 hour flight was a bit odd, but none of us had ever been to Sidcup before” Harry Jones, chief stick smacker told us, “but we had all brought sandwiches, flasks and a copy of ‘Morris Men Monthly’ so the time literally flew by.”

Once on the front line the group caused confusion, resulting in hostilities being temporarily halted. An American general explained: “As the group walked across no man’s land waving their white handkerchiefs, we all thought the allied French troops had surrendered. It was only when they started banging their sticks against the Taliban’s rifles we knew it was something we were less used to.”

Taliban leaders have sent a request to the UN to clarify whether Britain has broken any rules under the Geneva Convention. “When we captured them we put them through interrogation, but if anything they seemed only too pleased to have someone willing to talk to them,” one militia man told us.

“After three days of intense torture we couldn’t take it any more so put out a radio message to our generals saying Mayday, Mayday but that just made them even more excitable.”

The morris men were released after weeks of intense negotiation and a large sum of money changing hands saw Britain agree to take them back.